The Munich High End show is one of the most important hifi shows in the world. This year Neat showed a display of several of the most popular models, and also featured the new IOTA speaker, playing on a modest system and placed on an IKEA sideboard, and supported by isolation cones. 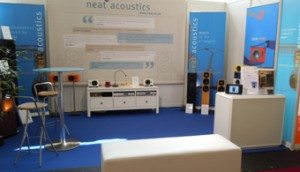 This was possibly the smallest and least imposing system at the show, but visitors were very, very surprised by what they heard. Here is a short film from the show: Iota @ Munich